What is a general release?
It's a valuable template if you are in the situation when you want to transfer the suits, debts, covenants, promises, contracts, controversies, agreements, claims, and demands, etc to the Releasee. Our GRelease Waiver Agreement Damage To Property is screened and often updated by Legal professionals.
What should be included in a Release Waiver Agreement Damage To Property?
Check out this sample Damage Property Release template for your reference. It included the following:
A simple waiver of liability will identify the following basic elements:
Releasor and anyone claiming on behalf of Releasor releases and forever discharges Releasee and its affiliates, successors and assigns, officers, employees, representatives, partners, agents and anyone claiming through them (collectively, the “Released Parties”), in their individual and/or corporate capacities from any and all claims, liabilities, obligations, promises, agreements, disputes, demands, damages, causes of action of any nature and kind, known or unknown, which Releasor has or ever had or may in the future have against Releasee or any of the Released Parties arising out of or relating to: (“Claims”).
Releasee: owner or organizer of the event or activity who is at risk of being sued Effective Date: when the agreement shall take effect
Event: description of event, activity, or circumstances being held
Consideration: the amount of money, promised (in)action, or something of legal value given in return for signing the Release or Waiver
Governing Law: any disagreements will be resolved using the laws of one state Other Names Accident Waiver and Release of Liability Form Conditional and Unconditional Waiver and Release Form General Release General Mutual Release Legal Release Liability Waiver Form Release of Liability Form Release for Damage to Property Release Waiver Agreement Waiver of Liability Agreement
WHEN IS IT NEEDED A Release or Waiver of Liability is often needed either before or after an incident occurs.
Download this Release Waiver Agreement Damage To Property template now! if you are in this situation and save yourself the time, costs or effort now and especially to prevent you from problems in the future! Also interested in other templates? AllBusinessTemplates is the most elaborate platform for downloading document templates and is updated every day with new templates! 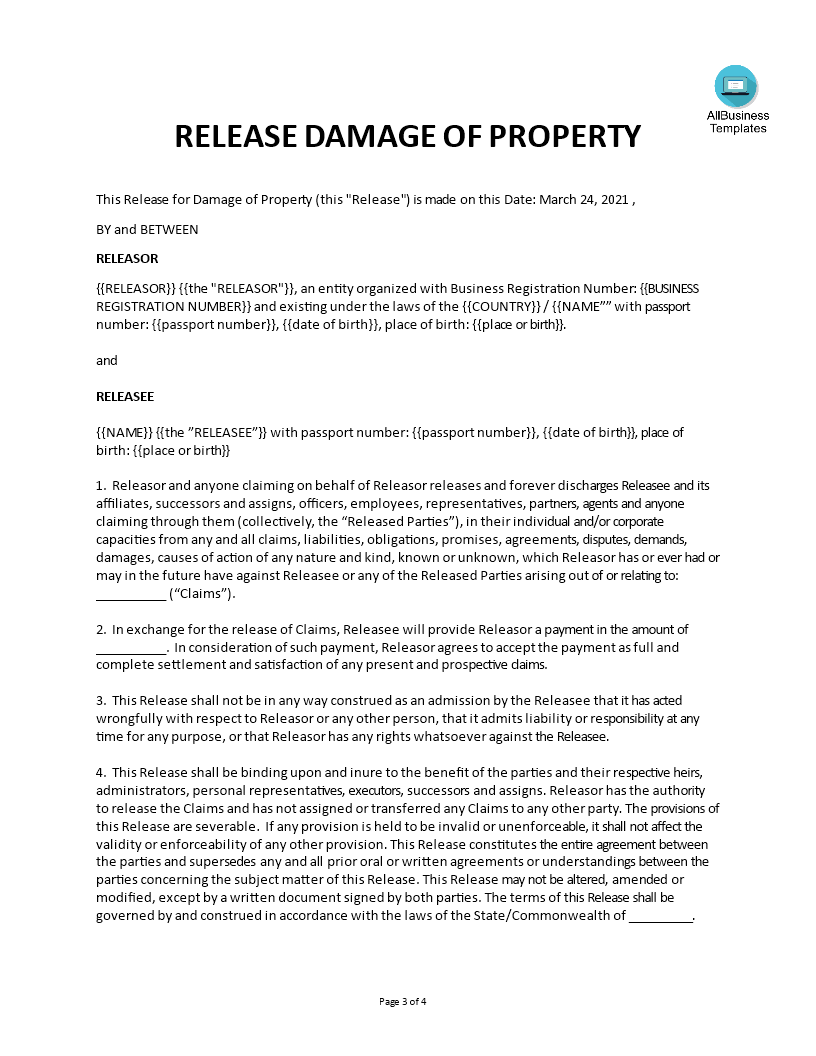