How to interpret the Morse Code Alphabet? Download this Morse Alphabet template now!
Morse code is a communication method of transmitting text information as a series of lights, on-off tones or clicks that can be directly understood by a skilled Morse code listener or observer without special equipment. Morse code is named after Mr. Samuel F. B. Morse, an inventor of the telegraph.
The International Morse Code encodes the ISO basic Latin alphabet, some extra Latin letters, the Arabic numerals and a small set of punctuation and procedural signals (prosigns) as standardized sequences of short and long signals called "dots" and "dashes", or "dits" and "dahs", as in amateur radio practice. Because many non-English natural languages use more than the 26 Roman letters (A to Z), extensions to the Morse alphabet exist for those languages.
We support you by providing this Morse Alphabet template, which will save your time, cost and efforts! The following three types are explained:
This Morze code template is intuitive, ready-to-use and structured in a smart way. Try it now and let this template inspire you. We certainly hope that this Morse Alphabet will fit your needs.
Download this Morse Alphabet template now and start communicating in Morse! 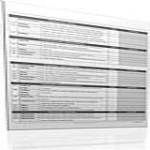