Are you looking for a professional Periodic Table Bingo Card? If you've been feeling stuck or lack motivation, download this template now!
Do you have an idea of what you want to draft, but you cannot find the exact words yet to write it down or lack the inspiration how to make it? If you've been feeling stuck, this Periodic Table Bingo Card template can help you find inspiration and motivation. This Periodic Table Bingo Card covers the most important topics that you are looking for and will help you to structure and communicate in a professional manner with those involved.
1 Periodic Table of Elements Atomic Number Atomic Mass Symbol Hydrogen H 1 1 Helium He 2 4 Lithium Li 3 7 Beryllium Be 4 9 Boron B 5 11 Carbon C 6 12 Silicon Si 14 28 Germanium Ge 32 73 Nitrogen N 7 14 Phosphorus P 15 31 Arsenic As 33 75 Oxygen O 8 16 Sulfur S 16 32 Selenium Se 34 79 Name Clue The lightest element, contains only a single proton, can lose or gain only 1 electron The lightest noble gas, filled outer shell with only two electrons, named for the Greek word for sun because first discovered in spectral analysis of sunlight Active alkali metal from Group I with three protons, forms 1+ ions in a salt Alkaline earth metal with four protons used in forming strong lightweight alloys with copper Metalloid in Group III combines with silicates to form heatresistant glassware, forms acid used in eardrops and as a pesticide Basis for all organic chemicals, essential for life as we know it on earth, element with four outer-shell electrons that undergo sp3 hybridization to form four bonding orbitals with tetrahedral structure The second most abundant element in the Earth’s crust a metalloid with four outer shell electrons used in solar cells, microprocessor chips, and ceramics Group IV metalloid used in doping computer chips and transistors Most abundant element in the Earth’s atmosphere, an element that is relatively non-reactive at normal temperatures, essential for protein formation in living tissues Group V element with three allotropes: white that reacts with air at 30o C and red that is less active element that is essential to strong root development in plants element used in fertilizers, explosives, and detergents Poisonous Group V metalloid used in making semiconductors and in pesticides Most abundant element on Earth making up 48 of the Earth’s crust, atmosphere, and surface water highly reactive element that supports combustion with many other substances essential for respiration in most living organisms ozone is a common allotrope six outer shell electro
Feel free to download this intuitive template that is available in several kinds of formats, or try any other of our basic or advanced templates, forms or documents. Don't reinvent the wheel every time you start something new...
Download this Periodic Table Bingo Card template and save yourself time and efforts! You will see completing your task has never been simpler!

A meeting is an event at which the minutes are kept and the hours are lost. | Unknown 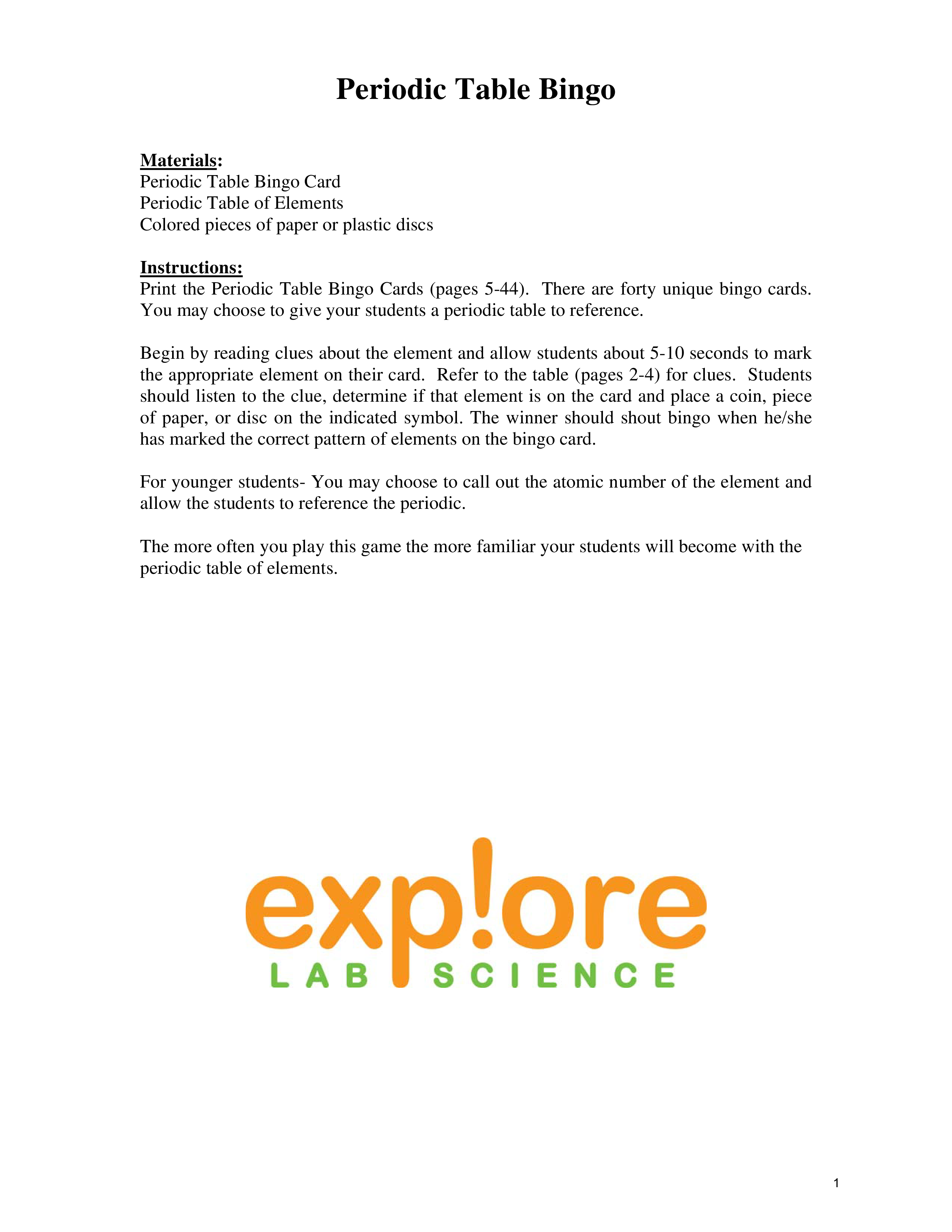