When is Chinese New Year in 2021? What animal is celebrated in 2021 according to the Chinese zodiac? Check out this Chinese new year calendar Ox year 2021 and find out all you need to know about this years' Chinese New Year!
Chinese New Year (or "Spring Festival" in modern Mainland China) is China's most important traditional festival and is celebrated at the turn of the traditional lunisolar Chinese calendar, which consists of both Gregorian and lunar-solar calendar systems. In general, the Chinese New Year starts anytime between the end of January and mid-February.
When Is Chinese New Year 2021?
The Chinese New Year of 2021 is officially starting on Friday, February 12th, 2021, and ends 31 January 2022. The holiday and festival will last until February 26th which is about 15 days in total. As an official public holiday, Chinese people can get seven days' absence from work, from February 19th to March 7th, but most will celebrate longer.
The Most Important Dates of Chinese New Year
According to the Chinese Zodiac, which is a cycle of 12 different animals, the Chinese year beginning in 2021 is the year of the Ox (in Chinese: niú 牛). So, considering each Chinese zodiac year begins on Chinese New Year's Day, all children that are born on or after February 12th, 2021 are Ox. 2021 Is the Year of the Ox according to the Chinese zodiac. The heavenly branch is 'Metal/Gold Ox'.
The people born in the year of the Ox can be best friends with Rat, Monkey, or Rooster. And the worst with: Tiger, Dragon, Horse, or Goat.
Famous Ox Year People:
The Ox is the second animal symbol in the 12-year cycle of the Chinese zodiac. The years of the Ox include1937, 1949, 1961, 1973, 1985, 1997, 2009, 2021, and so on.
People born in the year of the Ox hold conservative and traditionalistic personalities and are usually impress people with an image of endurance, are stubborn, cautious but hesitant, moody, honesty, and diligence and seldom fear for hardships or difficulties. They are persistent but stubborn, according to Chinese zodiac analysis.
Core Strengths Metal/Gold Ox:
• Hardworking,
• active,
• always busy,
• popular among friends.
Basic astrology elements:
• Earthly Branches: 丑 Chǒu
• The Five Elements: Earth
• Yin Yang: Yin
• Lunar Month: Twelfth
• Lucky Numbers: 8, 9, 3; Avoid: 6
• Lucky Flowers: tulip, evergreen, peach blossom, rose
• Lucky Colors: blue, red, purple; Avoid: white, green
• Season: Winter
• Closest Western Zodiac: Capricorn
This Chinese New Year printable template is macro-free and is easy to modify, save it now and use it later. Download this free Chinese New Year calendar Ox year 2021 Year of the Ox template now!

Whatever the mind of man can conceive and believe, it can achieve. Thoughts are things! And powerful things at that, when mixed with definiteness of purpose, and burning desire, can be translated into riches. | Napoleon Hill 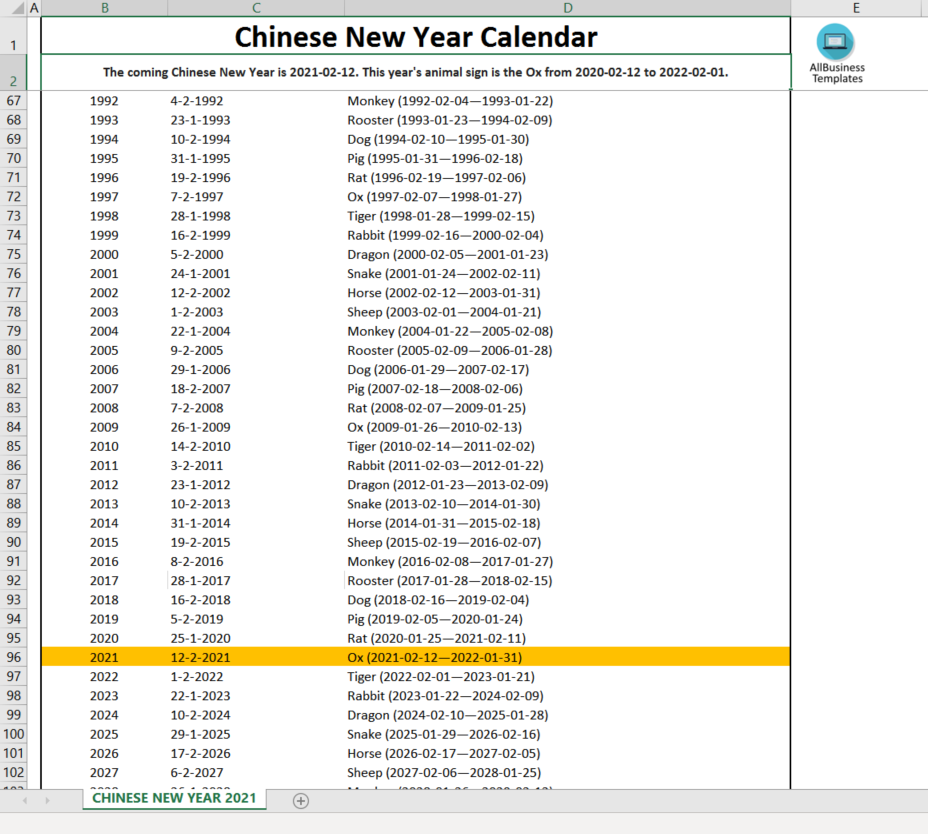