How to create a Funeral Mass Program? What should be included in a memorial service program?
Do you need a Catholic Funeral Mass Program? When you are organizing a funeral, there is a lot you need to consider. Since a funeral is often promptly held after the person passed away, time is of the essence.  A good guideline is within the first few days, following up on your loss, can provide some guidance.
Handwrite the funeral program on stationery rather than typing and printing from a computer. If you want to use a store-bought card, write a personal note on stationery and tuck it inside the card.
Write the mass program in your own style, as if you are saying it, and make sure to give meaning the way you would normally speak to the person.
There is no reason to get too fancy and try to come up with a poem or verse unless that is how you normally speak (which could be weird) or unless you’re a writer by profession.
This easy customizable Funeral Mass Program can be used for any kind of personal matter. We support you by providing this Funeral Mass Program template now.
Please have a look at it and you might even discover this template has a slightly different perspective and can be very helpful.
Mass of Christian Burial His Eminence
Cardinal Egan Archbishop Emeritus of New York
Cardinal Priest of Saints John and Paul
His Eminence Cardinal Dolan Archbishop of New York Celebrant
Cathedral New York City
His Eminence Cardinal Egan
Ordained Priest
Ordained Titular Bishop of Allegheny and Auxiliary Bishop of New York
Installed Bishop of Bridgeport
Installed Archbishop of New York
Created Cardinal Priest of
Archbishop Emeritu
Entered Eternal Life
Ministers of the Mass Principal Celebrant His Eminence,
Cardinal Dolan Concelebrants Cardinals Most Reverend
Apostolic Nuncio to the United States Archbishops and Bishops Priests Deacons Rev.. Egan Gift Bearers Great-Nieces and Great-Nephews of Cardinal Egan Music Ministry Director of Music
Associate Director of Music, Conductor
Assistant Director of Music, Organist
Cantor St. Patrick’s Cathedral Choir
Metropolitan Opera, Soloists 3 Prelude “A Prayer of St. Patrick” Paul French I arise today through God’s strength to pilot me, God’s might to uphold me, God’s wisdom to guide me, God’s eye to look before me, God’s ear to hear me, God’s word to speak to me, God’s hand to guard me, God’s way to be before me, God’s shield to protect me,
Lord, from death eternal on that fearful day, When the heavens and the earth
Download this Funeral Mass Program, which is a sample Catholic Funeral Mass Program template for your reference.

Everyone is a genius. But if you judge a fish by its ability to climb a tree, it will spend its whole life believing it is stupid | Einstein 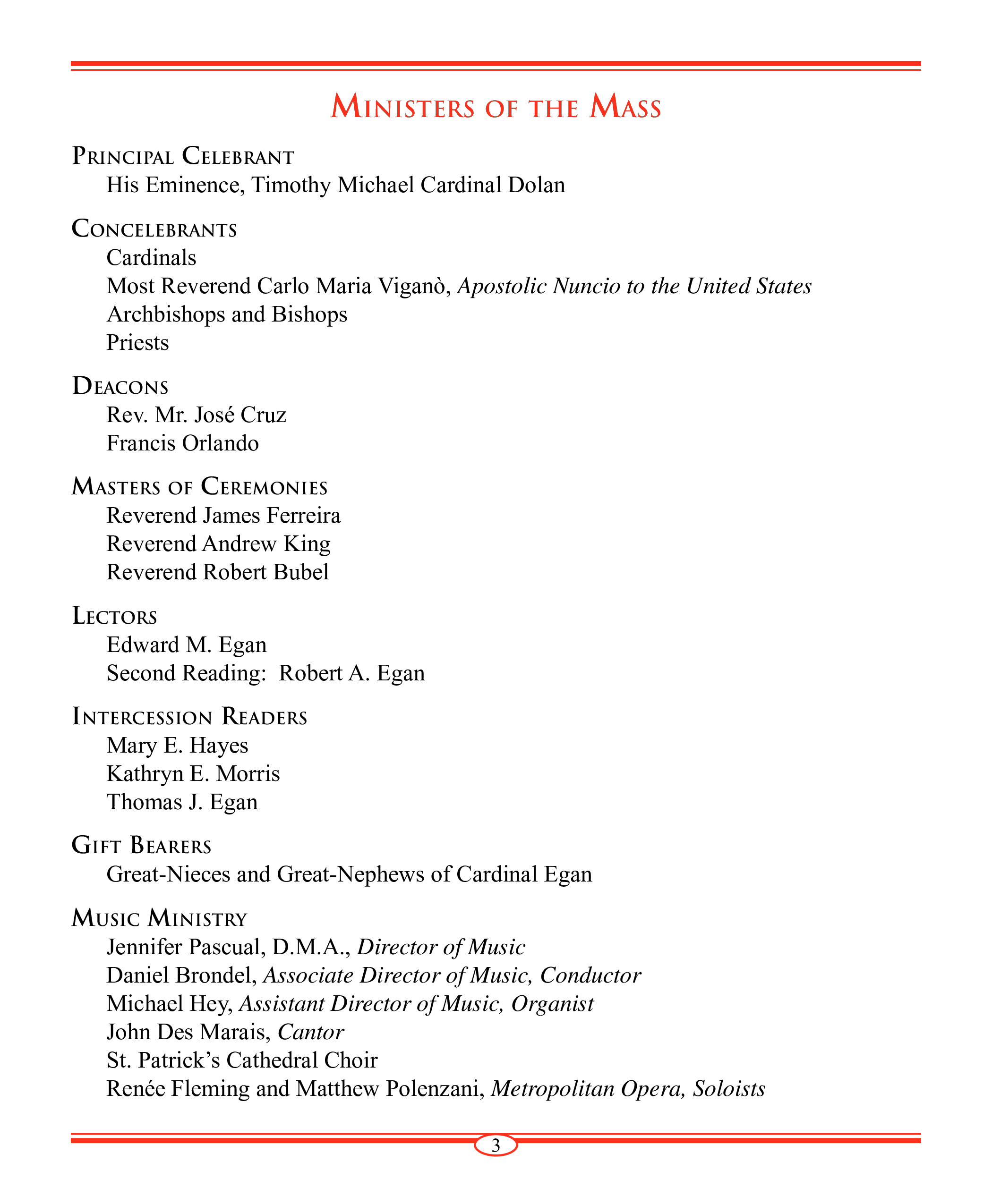