Do you need to write a thoughtful Resignation Letter? Download this example Resignation Letter now!
So goes a popular saying in Dutch used to announce one’s departure without having to go into details. There is a time of arriving and a time of leaving.
Whatever the circumstances of your departure, this Resignation Letter can help you draft a polite and appropriate resignation letter. In general, a resignation letter should be a short letter, formally exhorting your boss that you are leaving your job and the company. Such an abdication letter can help you keep up a positive association with your company and boss by leaving with a solid and positive last impression, while likewise preparing for you to proceed onward.
Please consider it might cause some stress for the employer who needs to find a replacement. Therefore it's important to give the notice in time (especially check with your contract), with for example two or four weeks, which is often an accepted minimum period of time.
We hope you made the best decision and this Resignation Letter can be of good use to you, in order to write a polite and compelling resignation letter.
Good luck with your next step!
UNITED STATES OFFICE OF PERSONNEL MANAGEMENT inspector General President Barack Obama The White House I respectfully submit my letter of resignation as the Inspector General for the U.S. Office of Personnel Management, effective Every day I, alongside the distinguished men and women in my office, have had the distinct privilege of exercising a strong social consciousness toward protecting and enhancing the public trust.

How To Write A Resignation Letter?

How to write a Resignation letter? If you are asking yourself this question, you must be ready to resign from your job. We provide the best professional, formal and basic letter of resignation templates for you.

The successful man is the one who finds out what is the matter with his business before his competitors do. | Roy L. Smith 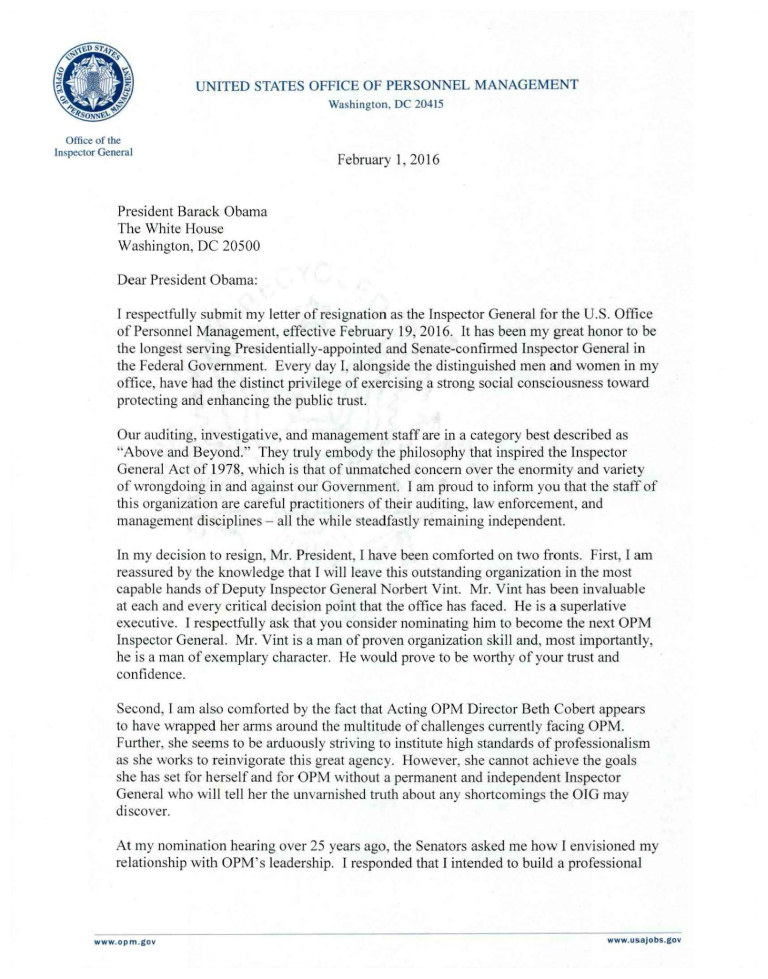